Singular they: 40 years on

Klazien Tilstra, a BA student at the English Department of the University of Leiden, just finished her BA thesis. The title is “Attitudes to the Usage of Singular They, 40 years on. A Survey among Editors”, and here follows a summary, written by herself. 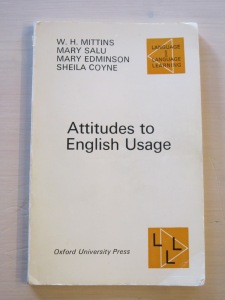 The point of departure for my thesis was the book Attitudes to English Usage, published in 1970 and written by W.H.Mittins, Mary Salu, Mary Edminson and Sheila Coyne. The context of the book is the “battleground” of prescriptive versus descriptive approaches to language use, the first focusing on “correctness” as laid down in “rules”, and the second concentrating on actual usage. Mittins et al. asked about 500 people to judge as acceptable or not acceptable the use of 55 debatable sentences, among which was the use of singular they (the use of they to refer to a singular sex-indefinite referent, as in Everyone has their off-days. About 80% of their target audience consisted of people with an educational background, of whom Mittins et al. expected to choose a middle position between a prescriptive and a descriptive approach. Their inquiry revealed that 72% of the respondents accepted the use of singular they in informal speech, while only 19% accepted the use of singular they in formal writing.

The central question of my thesis was whether the acceptability of the use of singular they in formal writing had increased since the 1970’s. In order to find an answer I conducted an on-line survey among members of SENSE, a network organization of native-speaking English editing professionals. I assumed that they would show similar attitudes to language use as the educators in the inquiry of Mittins et al., and that this would make the results of my survey to a certain extent comparable to their inquiry. I asked the editors’ judgments about four sentences, each with three variants to refer to a sex-indefinite antecedent: one using the pronoun they, one using he, and one using he or she, assuming that a comparison would enrich the view on the present attitude to the use of singular they.

The survey had a response of 41 editors: I am very grateful for them to contribute to the survey! And although the results should be treated with caution – a non-random sample of 41 editors of a group of about 400 is not per se representative for the group as a whole – the results confirm the observation of Huddleston and Pullum (The Cambridge Grammar of the English Language 2002) that the acceptance of singular they has increased. Mittins et al. showed an average acceptance rate of 19% in formal writing, while my survey shows an average acceptance rate of 63%. The results also indicate that the use of singular they, on average, met with more approval than disapproval, and preferred to the use of the alternatives he and he or she.

Many respondents used the space offered in the survey to comment, and suggested rewriting the sentences. Rewriting a sentence with a debatable pronoun to refer to a sex-indefinite referent is what Huddleston and Pullum (2002) call an avoidance strategy. The suggestions may indicate that the issue of singular they to refer to a singular sex-indefinite referent still produces tension, and that avoidance is seen as an attractive option. It may be that many respondents would agree with Kolln and Gray (Rhetorical Grammar: Grammatical Choices, Rhetorical Effects 2010), who, taking a rhetorical point of view, give the advice to keep the target audience in mind and, to reach the intended effect, avoid problems.

The survey gave me the opportunity, as Bodine called it in her article “Androcentrism in Prescriptive Grammar: Singular ‘They’, Sex-Indefinite ‘He’, and ‘He or She’” (1975), to study language change in progress. In the 1970’s, Bodine  pointed at the relevance of the issue of singular they by stressing that personal reference is one of the most socially significant aspects of language, and predicted a change in the attitudes to the use of singular they as a consequence of feminists’ protests against the use of sex-indefinite he. The results of my survey indicate that her prediction has come true.

2 Responses to Singular they: 40 years on