In the Dutch TV programme Floortje naar het einde van de wereld (“Floortje to the end of the world”), Floortje Dessing travels to remote places where she meets people who have often lived away from home for a long time. One of those people was a Dutch woman called Lianne, who has lived in the Namibian dessert together with her South-African husband Will for over two years. During her interview with Floortje, Lianne switched back and forth between Dutch and English, as Dutch is her native language, while she speaks English with her husband. For example, when telling Floortje about what her family thinks of her being away from home for so long, she said: Ik denk dat ze daardoor ook heel gauw beseften van ja, dit is ook wel het ultieme voor Lianne, like, dit is helemaal haar ding (“I think that that soon made them realize that yes, this is the ultimate lifestyle for Lianne, like, this is totally her thing”). What struck me was her use of like in an otherwise completely Dutch sentence. 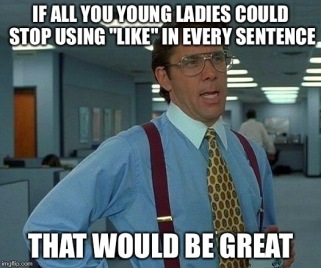 According to the OED, like can function as a noun, verb, adjective, adverb, con-junction, preposition and suffix (OED s.v. like). Like may therefore be called an extremely versatile word. However, Mesthrie et al. distinguish three uses of like, namely as a quotative, as a hedge, and as a discourse particle (Introducing Sociolinguistics 2009:118). These functions of like are relatively more recent than the ones described in the OED, and are the cause of critical discussion amongst English speakers.

For my BA thesis in English at Leiden, I conducted an online survey with Qualtrics (which I distributed on my personal Facebook page) to examine the attitudes of native and non-native English speakers towards the new uses of like. I asked participants to give their opinion on the use of like by other speakers, on their own usage and on their association of the use with level of education, by indicating how much they agreed with certain statements on these subjects. Afterwards followed some multiple choice questions, where participants could indicate with which particular age group, gender, of geographical location they associate the new uses of like. Finally, participants had the chance to provide some additional comments on other social or linguistic factors that they associate with the new uses of like, and on the issue of like in general.

The survey was filled out by 48 respondents – 17 native speakers of English and 31 non-native speakers, with American, British, Dutch, Belgian, German, French and Portuguese nationalities. As I collected the responses mostly through contact with friends and acquaintances, the majority of the participants – 90% – were around the same age as I am, namely between 18 and 24. It is important to note that the results from my survey are far from conclusive and that a larger number of participants, or participants from a different age group, education level or geographical origin, might have resulted in different results. But even though the figures from the survey are small, there are some interesting differences in attitude between the native and the non-native speaker groups.

The additional comments given in the open questions demonstrated the wide range of opinions on the subject of like. At the one end there are opinions like that of one of the participants (F, 21, non-native speaker, Dutch) who argued that the use of like as a hedge should be “banned”, as “it sounds as if people don’t know what they’re trying to say”. Another comment showed that not everyone agrees with this statement: “I like, really like nonstandard like” (F, 22, non-native speaker, Dutch).

The results from my survey correspond with the more general phenomenon that in general we human beings tend not to like change. Whatever is new is often met with derision, which goes for language change as well (D’Arcy 2007:444). However, what is new eventually will become old and I am curious as to how like will be viewed in say 20 years’ time. Will the new uses of like spread, or will its stigmatized status eventually cause the use of like to decrease? Who knows, by then there might be like a dozen new linguistic features to like really dislike.