Another Source for Burgess’s Five Hundred Mistakes of Daily Occurrence

In an article published in 2015, Ingrid Tieken-Boon van Ostade has suggested that while the anonymous editor of Five Hundred Mistakes of Daily Occurrence in Speaking, Pronouncing and Writing, Corrected (New York: Daniel Burgess & Co., 1856) borrowed some of his “mistakes” from Lindley Murray’s English Grammar (1795), he used other sources as well. I recently chanced upon an English work that was one of those sources. In a submission to the periodical Notes and Queries (Eleventh Series, Volume 11, 13 February 1915), Margaret Lavington discusses an anonymous pamphlet, Mistakes of Daily Occurrence in Speaking, Writing and Pronunciation Corrected (London: John Farquhar Shaw, 1855). The similarity in titles is too close to be accidental, particularly when we recognize that the words “Never Too Late to Learn” appear at the top of the title page of both books.

I’ve been unable to find a copy of the Shaw pamphlet, so I looked at the 53 examples (of 406 in the original) given in the Notes and Queries post. Ms. Lavington’s note is titled “Pronunciation: Its Changes”, and many of the examples she chose concern pronunciation. But eight of the examples she gives are lexical, and we can hope that this provides a reasonable sample for comparison with Burgess.

Of the 53 examples of Shaw’s “mistakes” that are available for comparison, only 32 appear in the American book; half of these are modified, some substantially. The Burgess editor, addressing a North American audience, noticeably avoids references to England, omitting from Shaw’s version one English personal name (Archibald Constable) and two English place names (Nottingham and City of London). He labels the use of notable as obsolete “except to a slight extent in England”. And he criticizes the pronunciation “gehl or gul” for girl (in imitation of a non-rhotic accent such as the English Received Pronunciation) as “an affectation of which many polite persons are guilty”.

Henry Hitchings mentions the Shaw Mistakes of Daily Occurrence in his The Language Wars: A History of Proper English (New York: Macmillan, 2011, 175). I think he goes too far when he writes: “The following year a New York firm released an expanded version, in which the number of flubs had increase to five hundred.” The Shaw pamphlet was used by the Burgess editor, but he chose to omit many of Shaw’s “mistakes”, modified most of those, and added many more. This is clearly a very different work, intended for a very different audience. 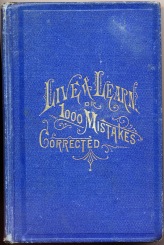 If there is any book published in the United States that deserves to be called “an expanded version” of Shaw’s pamphlet, it is Over 1000 Mistakes Corrected: Live and Learn (New York: Dick & Fitzgerald, 1856). All 53 of the “mistakes” available for comparison are found in the Dick & Fitzgerald volume, and the text of these is identical to Shaw’s, with two exceptions: in Shaw’s #253, Monument becomes Bunker Hill Monument; in Shaw’s #330, American Reviewer becomes Reviewer. The numbering is also identical up until #136, suggesting that Dick & Fitzgerald included all of Shaw’s first 136 entries; thereafter, it appears that the North American work omitted a small number of Shaw’s “mistakes”. From the evidence of the 53 examples we have, then, it appears that Dick & Fitzgerald copied Shaw’s text, with a small number of editorial changes for readers in the United States.