Was she American after all?

Last week, my book In Search of Jane Austen: The Language of the Letters (OUP, 2014) came out. I’ve already commented on this blog on the very interesting editorial process, which resulted in some changes that I wasn’t too happy about. I guess this happens all the time. I had been asked for my linguistic preferences, and I had specified British English, largely because I was worried about changes that might affect my whichs and thats.

None of that happened, which was good, but there were other changes, and one of these led to my in the light of being changed into in light of. Though I’m not an English native speaker, I’m definitely an in-the-light-of user, so I changed them all back again. I tried to explain this to the editor by showing an Ngram of both constructions, which would have suggested that I’m probably considerably older than she is. 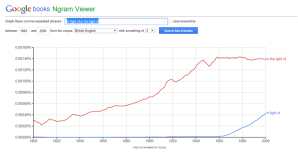 Ngram in (the) light of, British

In the above Ngram the search parameter was set to British English. But look what happens if you change it to American: 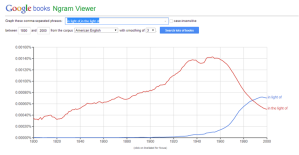 Ngram in (the) light of, American

The different graph suggests that age may not have been an issue after all: could the editor have been American?

This entry was posted in usage features and tagged in light of, in the light of, Jane Austen, Ngram. Bookmark the permalink.