These are literally my favourite expressions

Those of you who have seen the show Parks and Recreation are familiar with the recurrent use of the word literally. Rob Lowe’s relentlessly optimistic character, Chris Traeger, is a notorious over-user of the word. It must literally be his favourite in the world. 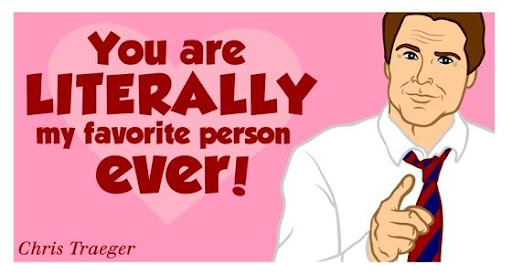 Indeed, many of his literallys are of the ‘incorrect’ actually-not-literally variety which many usage guides deplore, such as this one:

That literally went on forever. I thought you were never going to stop talking

Obviously, the writers of the show keep putting them in because it’s funny, but I suspect also because they know it annoys the language pedants. But the interesting thing is that many of Chris’s literallys seem justifiable to me, since he often uses them to modify his opinions or feelings, as in this one:

That is literally the best news I’ve heard all day

Here is a compilation of Chris’s literallys on YouTube you can watch. Which are justifiable and which are ‘incorrect’?

I am a linguist and EAP trainer, working on English prescriptivism and Standard English. Lover of photography and comedy.
View all posts by Robin Straaijer →
This entry was posted in usage features and tagged literally, Parks & Recreation, Rob Lowe, television. Bookmark the permalink.