Here is Kate Taylor’s first blogpost (Kate is another of my MA course Testing Prescriptivism students).

In my experience there are three levels of knowledge regarding the uses of the words effect and affect: imagine these three levels as the tiers of a wedding cake starting with the largest layer at the bottom and decreasing in size towards the top.  The bottom layer of the cake consists of those people who use the two words effect and affect completely interchangeably as either verb or noun and don’t realise any difference between the two. This is an activity with which pedantic grammarians would not be at all happy, as you can see from the entry in The New Fowler’s Modern English Usage below.

affect, effect  As verbs.  These verbs are not synonyms requiring differentiation, but words of totally different meaning neither of which can ever be substituted for the other.

These people from the bottom layer are often corrected by the so-called ‘Amateur Grammar Nazis’ of level number two who you can see commenting in the above cartoon from the webcomic XKCD.  These self-confessed pedants of grammar know that affect is a verb meaning “to act upon” or “influence” and that effect is a noun meaning “a result” or something that is produced by a cause.  In fairness these are the most commonly used forms of the words, so this level of knowledge will normally be enough to get them through life with no problems. Not everybody from the second layer is a language pedant, but the ones who are cause problems for themselves and others when they assume that anyone using effect or affect differently to them must be using the words incorrectly.  What these people don’t realise is that there is in fact a third, higher tier on this linguistic cake, reserved for the truly knowledgeable or for those lucky enough to have stumbled upon the further meanings of these words in their journey through life. The third tier know that effect can also be a verb meaning “to cause to occur” or “bring about”, and that affect can be a noun, which is an emotion associated with an idea, though this is only used very rarely and most often by psychologists only.  This layer contains the only people who would both be able to recognise that if something affects you, 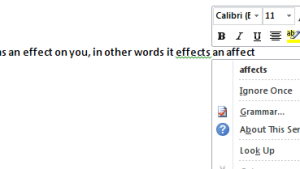 it has an effect on you or in other words can effect an affect and who would be in a position to glean the correct meaning of this utterance (even in typing this sentence Microsoft Word recommends that I change the second effect to affect which proves that you can’t even trust your spellchecker to get its grammar correct).