The turbulent times of hopefully

Below follows Anna Yuryeva’s first blog post. She’d be pleased with your comments.

Two years ago, in April 2012, the Associated Press (AP) Stylebook published a tweet, which was followed by a virtual tsunami of criticism from grammar enthusiasts: “Hopefully, you will appreciate this style update, announced at #aces2012. We now support the modern usage of hopefully: it’s hoped, we hope.” What has been happening for decades among speakers of English around the world – that is, using the word hopefully to modify a whole sentence, contrary to the traditional meaning “in a hopeful manner” (that is, modifying only a verb) –  is now accepted in official writing as well. 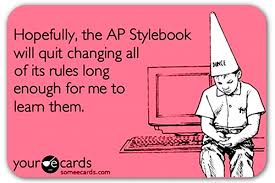 The historic announcement not only received a lot of attention from fellow tweeple, it also sparked outrage in the Washington Post, the New York Times, and among a number of grammar devotees on the Internet. Despite the fact that clause-modifying hopefully has been around since the second half of the twentieth century according to the Oxford English Dictionary, the language gatekeepers appeared to greatly disapprove of this news: “When enough people fail to learn the rule, the mistake becomes the rule. This is change but not progress,” says one commenter in response to a blog post dedicated to this announcement. “Really wish you hadn’t done this. But I understand why. It’s like media as a plural word—you can’t fight the tide forever,” adds another. These claims also draw attention to the idea that accepting such usages will (potentially) make our written communication more confusing – one concerned writer, sharing his opinion on the Editorial Board blog of Minnesota Daily, believes it is highly unlikely that anybody would paraphrase the AP tweet as “We hope, you will appreciate …”. Omit the comma and the sentence will read: “In a hopeful manner, you will appreciate this style update.” Yet, these people ground their arguments on beliefs that may not be shared by other speakers.

While the negative reactions may all seem at least somewhat reasonable, they do, in fact, call attention to a truly chicken-and-egg situation in language: what change is a natural step in language change, and what is just laziness to obey certain rules? In the case of hopefully, it looks like the AP Styleguide is only trying to “keep it real”, as Clyde Haberman of the New York Times puts it. AP’s deputy standards editor David Minthorn explained the style update as follows: “[…] it just seemed like a logical thing to change. We’re realists over at the AP. You just can’t fight it.” Hopefully, then, may serve as an epitome of this kind of battlefield language professionals come across on a regular basis; the question is, though, whether vernacular usages, spread by means of Internet platforms like blogs and other social media, will eventually make the prescriptivists reach a peace treaty.

What we would be interested in is how the readers of this blog would respond to the AP tweet. We hope (hopefully?) you will let us know.