In the post today: my copy of Seth T. Hurd’s Grammatical Corrector, the first American usage guide, published in 1847, and found on ebay. It is in better condition than the ebay picture suggested: it has a green cover, and a leather spine with gold embossed stripes. And it seems to have been barely used at all: no inscription, no pencil marks. It can be consulted through Google Books as well. 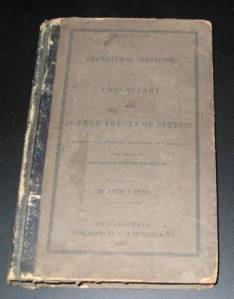 Worldcat doesn’t list any later editions, nor have I been able to find out who the author was. Still it is an interesting little book. It is unusual as a usage guide in that it provides a long list of all the books (grammars and dictionaries, British and American ones) that Hurd consulted, and also because he locates the usage items he discusses according to where he had heard them, such as have went (Ohio, Pennsylvania). The word eenamost (also in Jane Austen’s letters!) he labelled as “a gross corruption”. A linguistic goldmine!

This entry was posted in news, usage guide and tagged usage guides. Bookmark the permalink.