Between You and Me: Confessions of a Comma Queen

Editors and language advice seem to go hand in hand. When in doubt about language matters, who better to consult than those whose job description includes improving style, formatting, and proofreading.  Mary Norris of The New Yorker has joined the ranks of the editors-turned-usage guide authors such as Patricia T. O’Conner, the author of Woe Is I (2010) and the co-author of Origins of the Specious (2009), and the Daily Telegraph’s Simon Heffer (Strictly English 2010).

This book is not, however, your typical usage guide. Mary Norris tells the story of her life 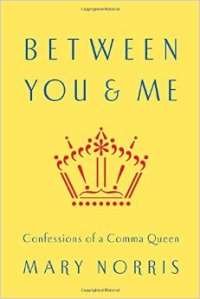 as a copy editor of thirty-five years in The New Yorker. The autobiographical narrative is interrupted by exposés on usage problems including which vs. that (it depends on the context), dangling participles (they’re not always wrong), singular they (don’t use it), between you and I (barbaric), whom (let’s keep it), and apostrophes (hang on to them). Norris lets the readers in on the editorial practices of The New Yorker such as: when in doubt, check Webster’s, preferably the second edition and not the easygoing third, practice a “close” style of punctuation, and do not close up style compounds, as in hair style.

The author contextualizes her advice by inserting anecdotes from the history of (American) English. The stories of the birth of the comma, the hyphen in the title of Moby-Dick and dashes in Emily Dickinson’s poetry do a good job in keeping the reader’s attention. Although the usage advice does include many personal judgments, Norris confesses that “A lot of the decisions you make as a copy editor are subjective.” She engages in discussions with Bryan Garner, Eleanor Gould Packard, the late editor of The New Yorker, David Marsh, the production editor of the Guardian and the editor of its style guide, and Steven Pinker, whose views on language are too permissive for Norris’s taste.

The more lenient successor of the Lynne Truss punctuation guide tradition gives a good insight into the long career of a copy editor. Since I’ve been researching public comments on media language, it struck me to see how many times Norris referred to letters received from the readers of The New Yorker. Guarding language standards seems to be a joint endeavour of both the media and the public who expect journalists and editors to exemplify the highest writing standards, keep offering language advice, and, luckily for the publishers, write usage guides.

This entry was posted in news, usage guide and tagged between you and I, Confessions of a Comma Queen, Mary Norris, punctuation, The New Yorker, usage guide. Bookmark the permalink.

3 Responses to Between You and Me: Confessions of a Comma Queen