He said, she said or he admitted, she boasted?

What is wrong with the word said? Personally, I do have nothing against this very useful verb. But as it turns out, some teachers in the US are actively encouraging their students to not make use of it. 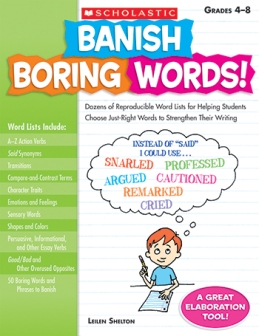 Gabriel Roth describes this trend in his Lexicon Valley blog post “Teachers! Please Do Not Make Your Students Use Synonyms for Said,” I Blurted and states examples of teachers including said on lists of banned words or providing pupils with lists of alternatives to use instead. One of the leading proponents of this trend is Leilen Shelton, middle school teacher and author of the book Banishing Boring Words which displays a school boy thinking of words to use instead of said on its cover.  According to Roth, the problem lies in the application of this banning-said approach. While finding useful synonyms and enriching the pupils’ vocabulary are sensible objectives, Roth cautions against possible drawbacks:

First we’ll teach students to vary their vocabulary, and then to modulate their tone appropriately. The problem is that, on the evidence of all those slush piles, step two never takes place, and Shelton’s students go out into the world commanding and boasting and suggesting in the belief that they’re making their writing “more sophisticated” rather than less.

It does not come as a big surprise that the trend of substituting said also has been noticed in Great Britain. Toby Chasseaud reported on the Mind your language blog of The Guardian on newspapers replacing said with admit resulting in an expansion of meaning of admit in order to avoid repeating said or sounding too plain. He illustrated this by including numerous examples taken from various UK newspapers which shows not only its widespread use, but also its admitting downright ridiculousness. Chasseaud’s annoyance with replacing said is obvious as he said:

“A poll by LighterLife found nearly a quarter of UK women admit to secretly eating.”

Admitting to eating? Whatever next? Man admits to breathing? Woman admits to drinking water? I must admit I’ve had enough already, and most readers probably have too.

What do you think about avoiding said? Is it simply a matter of style?  Let us know what you think in the comments below! 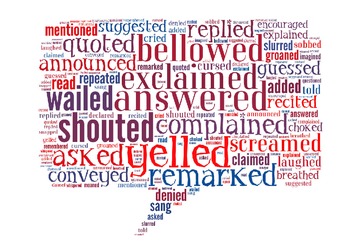 Carmen Ebner is a sociolinguist. In September 2017, she has obtained her PhD in Linguistics from Leiden University Centre for Linguistics (LUCL) in the Netherlands, where she worked on a project on language attitudes and prescriptivism in British English. Carmen's research interests include all things sociolinguistics. In particular, she is interested in linguistic discrimination, attitude elicitation techniques, language variation and change, and historical sociolinguistics.
View all posts by Carmen Ebner →
This entry was posted in usage features and tagged admit, newspapers, said. Bookmark the permalink.

7 Responses to He said, she said or he admitted, she boasted?