Dutch letters to the editor

In my experience, letters to the editor are not a frequent phenomenon in Dutch newspapers, at least not when they deal with language, and in any case not in the daily newspaper I read, NRC Handelsblad.  A while ago I wrote a blogpost here when one such letter did appear – it seemed like a remarkable exception.

Interestingly, this month’s issue of Onze Taal (a Dutch magazine that deals with all kinds of language issues, prescriptive or otherwise) included an article by Jacco Snoeijer, on letters to the editor. The article deals with the text type in general, and even offers advice on how to write a letter that has the best chance of getting published (it doesn’t, however, discuss editorial policy on which letters on what topics get selected for publication, something I’d really like more information on, in general that is!). The article is in Dutch of course, but the guidelines might well be applicable for English too (be brief, clear and to the point, and avoid letting emotions get the better of you). 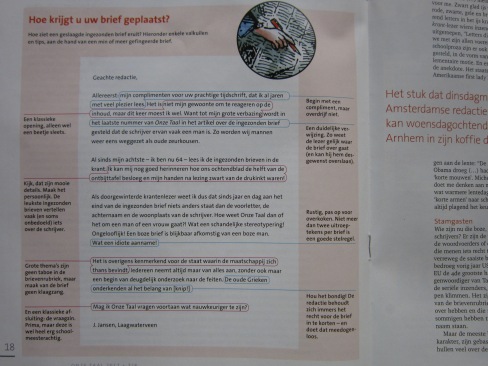 The article also claims that usage problems are a regular topic of letters to the editor, and that there is a host of letter writers that regularly comments on language errors. But I rarely see them, or at any rate, not in the paper I read. Perhaps NRC has a different policy in deciding what goes in and what doesn’t than other quality or other newspapers. Or perhaps the author is referring to letters addressed to Onze Taal itself: I’d really like to know, Jacco Snoeijer!

The article also mentions professional complainers, by which the author means spokesmen of companies or ceo’s who write to correct mistakes they encountered in the press. But in my own research I’ve come across letter writers who are professional in a different sense, in that they turn writing letters to the editor into a proper profession. I’ve also come across a case in which the reception of a controversial publication about language was turned in a battle of letters to the editor, in different newspapers no less. Do such arguments – about language, I mean – occur in The Netherlands too, I wonder? I really feel there is a different culture between the UK and The Netherlands in this respect. The Netherlands of course has Onze Taal as a proper outlet for these kind of things. I’m not sure if there is such a journal for English, but if there is, please let me know.

This entry was posted in letters to the editor, news and tagged Jacco Snoeijer, NRC, Onze Taal. Bookmark the permalink.

1 Response to Dutch letters to the editor