Singular they and women

Back and forth to Berlin last week, for the Wild Publics conference organised by Theresa Heyd and Britta Schneider. There were two papers on prescriptivism, my own (Codification – prescription – prescriptivism: The authority of the lay-person) and one by Anne Curzan, called How linguistics gets lost in public debates about language, as well as a host of other very interesting papers and presentations. Well done, Theresa and Britta! 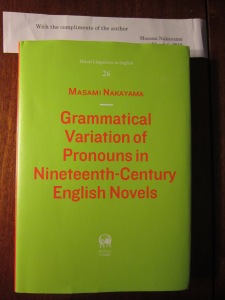 Taking the train seemed more ecologically sound, so there was plenty of time to read Masami Nakayama’s new book, Grammatical Variation of Pronouns in Nineteenth-Century English Novels, just out and a gift from the author. Pronouns, it seems, make up quite a few usage problems: It is I/me, than I/me, as tall as I/me, me/myself, between you and I, who/whom, whose/of which, and … singular they, chosen as word of the year 2015 by the American Dialect Society. All these can be found in the HUGE database, and all were meticulously analysed by Masami Nakayama for their occurrence in twenty 19th-century novels, ranging in time from Jane Austen’s Pride and Prejudice (1813) to H.G. Wells’s The Invisible Man (1897).

My most interesting finding? That singular they was used more frequently by female than male characters in the novels but also that the pronoun was found more frequently in the novels of female than male authors, at an overwhelming ratio of  9 instances to 1. So, Masami argues, it is thanks to women that singular they survived during the 19th century, despite heavy proscription from grammarians as well as an Act of Parliament imposing sex-indefinite he in 1850. And just as well, since it now comes in very handy as a gender neutral pronoun. So thanks to you too, Masami, for providing us with these fascinating data!

This entry was posted in news, usage features and tagged singular they. Bookmark the permalink.

1 Response to Singular they and women