Posted on September 26, 2012 by Robin Straaijer

The European Commission advocates plurilinguism, and wants people to develop some degree of proficiency in two languages or more to be able to play their full part in democratic citizenship in Europe. 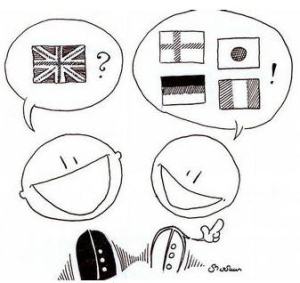 This European Day of Languages also raises questions about the role of English as a Lingua Franca (ELF) in Europe; as well as the teaching of European languages in the UK, as in this article in the Guardian.

Here at Leiden University, there seems to be a tendency to use English, even when another language, such as Dutch or German, would do just as well. How often do you find yourself speaking English when there’s actually no pressing need for it? What is the reason for using English (as a lingua franca)?

I am a linguist and EAP trainer, working on English prescriptivism and Standard English. Lover of photography and comedy.
View all posts by Robin Straaijer →
This entry was posted in news and tagged critical language awareness, ELF, plurilinguism. Bookmark the permalink.

1 Response to European Day of Languages