One of the things I’m interested in connection with the research for the Bridging the Unbridgeable project is John Honey, the author of Language is Power (1997) and the earlier pamphlet The Language Trap (1983) (as well as several other publications). Honey’s publications were pretty controversial – to put it mildly – and much has been written about them in the public press as well as in reviews of his work. If you search for John Honey in this blog, many references that illustrate this will come up.

One of my colleagues in linguistics assured me that the debate about Honey’s controversial views had died down along when Honey died himself, which, as we now know thanks to Cynthia Lange’s research, must have happened around 2002.

Nothing, however, could be further from the truth.

Keeping this blog allowed me to take a measure of the current interest in Honey and his publications, and on the basis of the data provided on search terms to get to the blog I can see that for the past thirty days, 13% of the search terms through which readers accessed the blog included a reference to John Honey or his publications. 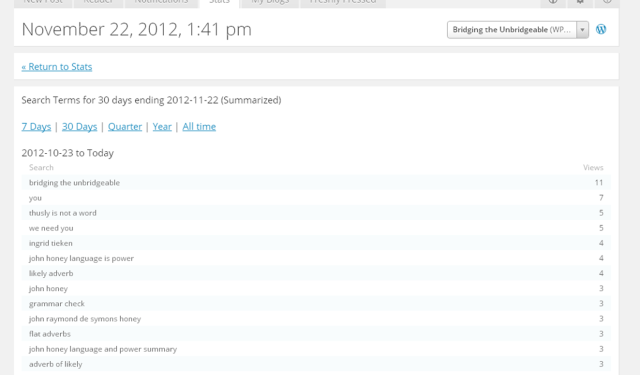 For my own part, I’d like to get in touch with whoever is doing research on Honey, as I’d like to hear what they think about the debate surrounding his publications. Perhaps we can exchange views on this controversial man that will help put him and his work into a more neutral, rather more objective perspective in the light of what was going on in the British educational system during the 1980s and 90s.

This entry was posted in Uncategorized and tagged John Honey, Language is Power, language trap. Bookmark the permalink.