The use of English, or rather its misuse, has often caused the one or the other to throw up his or her (or their?) hands in horror. Last month I attended the English Grammar Day at the British Library in London and to my surprise even linguistics seem to have harboured strong feelings towards English usage. One question from the audience aimed at identifying the panel’s ‘most hated’ neologisms. Learnings, to uplevel and to gallery one’s ideas were mentioned. 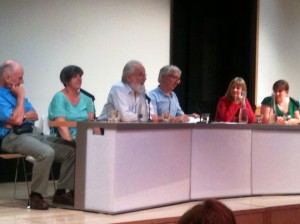 As part of my survey, I have also been interviewing people, as I am currently doing in Cambridge. One of my questions deals with pet hates. It was no surprise for me to see that everyone had at least one word, usage or phrase they could not stand. The historic present, confusing I and me, like, literally are just a few to mention here. What was surprising though, was that even those who stated to be fine with the way English has been changing did not have to think hard about what they personally did not like in English usage today.

The BBC today reports on the inclusion of new words into the Oxford Online Dictionary. YOLO, an acronym for You only live once, adorbs, a shortening of adorable (read my blog post on similar shortenings), and amazeballs, a modern alteration of amazing, can be found among those. Before you lose your head, these words are only included in the online dictionary, not the paper version.

As a sociolinguist, I am interested in seeing how English is being used and how it is evolving in different parts of the world. Oxford Dictionaries editor Katherine Connor Martin mentions in a blog post the use of a language monitoring programme, which allows them to identify trends in usage. That is how they have been able to identify that adorbs is used four times more frequently in the US than in the UK. Details about their “unique” tool are, however, not mentioned. So what is their secret weapon? Is it merely a corpus?

I am still puzzled, but also amused, to see how people, no matter how descriptive they might be, tend their pet hates. What about yours?

Carmen Ebner is a sociolinguist. In September 2017, she has obtained her PhD in Linguistics from Leiden University Centre for Linguistics (LUCL) in the Netherlands, where she worked on a project on language attitudes and prescriptivism in British English. Carmen's research interests include all things sociolinguistics. In particular, she is interested in linguistic discrimination, attitude elicitation techniques, language variation and change, and historical sociolinguistics.
View all posts by Carmen Ebner →
This entry was posted in Uncategorized and tagged adorbs, BBC, British Library, English Grammar, English usage, Katherine Connor Martin, linguists, Oxford, pet hates, usage, YOLO. Bookmark the permalink.

2 Responses to No hard language feelings?