Our list of usage guides, which we drew up as a basis for the HUGE database, includes various female authors, and more of them the further we get to modern times. The first woman on our list is Rosaline Masson, whose Use and Abuse of English was published by James Thin from Edinburgh in 1896. We looked for a copy of the book before, but I was only recently alerted to the fact that a copy was for sale from Plurabelle books. (Thanks, Paul, for telling me about it!) The copy is now mine, not of the first edition, but of the fifth revised edition of 1929 – still, I’m happy enough as it is. 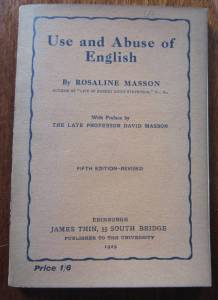 Who was Rosaline Masson, and what makes her an authority on English usage? She has no entry in the ODNB, but she does have one in Wikipedia as well as in the online Oxford Companion to Edwardian Fiction (1997 [2005]). There she is described as the daughter of David Masson, professor of English Literature at University College London and later of English Literature and Rhetoric at the University of Edinburgh. The entry doesn’t have a great deal to say about Rosaline (and her year of birth is different from the one in Wikipedia), except that she was a friend of the novelist Robert Louis Stevenson (1850-1894), that she was the author of several books on Ediburgh and Scotland, that she’d written six novels and had edited several anthologies. The Use and Abuse of English is not mentioned.

WorldCat is more informative: searching for her name produced a lengthy list of titles, including Use and Abuse of English and a book called Elements of English Composition published in the same year (1896). By the time Use and Abuse of English first came out, she had already published Three Centuries of English Poetry: Being Selections from Chaucer to Herrick with her father, in 1876 (London: Macmillan) and a collection of short stories called My Poor Niece: and Other Stories (1893, London: T. Fisher Unwin). Much leter, she published two books on Stevenson (1922, 1924).

Use and Abuse of English opens with a preface by her father, as indeed the cover advertises: presumably, this would give the book greater status. In her own preface she writes: “This little volume was originally compiled at the suggestion of my father” (p. xi). Not her own idea, in other words. The book (108 pages) deals with Punctuation, Common Errors, Scotticisms and other Colloquialisms, Figures of Speech, English Verse and rules for composition. For our work, the chapter on common errors is of particular interest. It contains many of what we now call “old chestnuts”: shall/will, mutual/common,the placement of only and many others. The section on Scotticisms is also worth studying: one feature included there is a comment on the use of likely for very likely, which I always thought was an Americanism.

Still the question remains what made her into an authority on usage. If the lifedates in Wikipedia are correct, 1867-1947 (1949 in the Oxford Companion to Edwardian Fiction), she would have been in her late twenties when she published the book. Very young for an expert on usage, that is, if we go by the age at which most of “our” usage guide writers published theirs. Writing a usage guide was her father’s idea, so quite possibly he had noticed a well developed linguistic skill in his daughter when working with her on their first book together. And she also published a handbook on composition, in the same year. Were the two publications meant for university students at Edinburgh? James Thin, as the image above shows, was “publisher to the university”.

This entry was posted in usage guide and tagged Rosaline Masson. Bookmark the permalink.