Hisself: should we allow it or not?

And here is another blogpost from one of my MA students. Maha Khalil would like to know why the non-standard reflexive pronoun hisself remains non-standard today. The blogpost was inspired …

… by an article published by the Scottish writer and journalist Harry Ritchie in The Guardian in December 2013, called  “It is time to challenge the notion that there is only one way to speak English”, in which he strongly rejects the prevalent notion that standard English forms are always deemed “correct”, whereas non-standard English forms seem to be wrong and ungrammatical.

This week, we are focussing in class on African American (Vernacular) English, and are studying the list of features included in Ax or Ask? The African American Guide to Better English, by Garrard McClendon. One of the features listed in the book is hisself,  which is condemned as “nonstandard for himself“. However, from Harry Ritchie’s perspective, there would be nothing wrong with hisself, the more so since standard English has my+self, her+self, our+selves. Consequently, hisself should be fully grammatical as it follows the same rule, and himself might be seen as the odd one out. 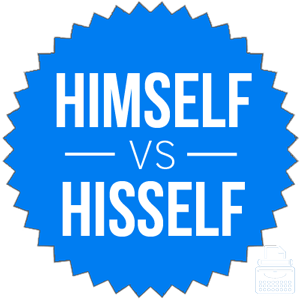 I also searched the HUGE database in order to see whether hisself is treated as a usage problem. It is, for I found out that the reflexive pronoun is dealt with in 12 usage guides, in 12 entries altogether. Most authors of the usage guides do not agree with the use of hisself for two main reasons: it is formed on the genitive case of the pronoun rather than the object case him (in spite of the fact that we have myself, ourselves, yourself, yourselves), and it mostly characterises the language of uneducated and unsophisticated people.

I therefore decided to ask you as readers of this blog (native or non-native speakers of English alike) what you think of hisself: should it be considered acceptable, as Harry Ritchie seems to advocate, or should it indeed be condemned, as the usage guides in HUGE do, and should it therefore, as Garrard McClendon advises speakers of African American English, be avoided? Please leave your comments below : they will be of great use for my presentation on the subject next week. I will of course treat your comments entirely confidentially.

This entry was posted in polls and surveys, usage features and tagged AAVE, hisself. Bookmark the permalink.

3 Responses to Hisself: should we allow it or not?