Guess what?! You don’t just speak a dialect; you’re also illiterate and uneducated!

And here is Ilse Stolte’s second blogpost, on a topic related to the first one she wrote about:

For the course on Non-Standard English and prescriptivism, I spend a great deal of time reading through entries of usage guides in the HUGE database. It is interesting to see that there are so many ways of writing a usage guide; there is so much variation in the language used. Some authors use very negative metalanguage; for instance, in her book Her Ladyship’s Guide to the Queen’s English (2010), Caroline Taggart writes that the double negative “is the supreme example of duplication through lack of understanding” (p. 43) and double negatives “are among the clearest indicators of inelegance” (p. 43).

Other authors, even though they still prescribe and proscribe, use less negative metalanguage. They do not overtly condemn; they simply state the grammar rules. A few entries caught my attention. When I initially read them, they seemed positive, or just not overtly negative. However, reading them a bit more carefully, something struck me. I’ll give two examples from The New Fowler’s Modern English Usage (2000):

Its [them] use as a demonstrative pronoun, permissible in standard sources from the 15c. onwards, is now only dialectal or illiterate. (pp. 776-777)

… and also of swoll as a byform for the pa.t. until the 19c. before it became restricted to dialect or illiterate use. (p. 575)

Did you spot it? I am, of course, referring to “dialect(al) or illiterate”. This phrasing seems a strong condemnation of dialects. It sounds as if the two, dialect and illiteracy, are interchangeable, as if they are essentially the same thing. I was already aware of the stereotypes of certain dialects and have heard and read about the stereotypes connected to some. For instance, in a 2011 newsarticle, The Telegraph reported on a study which showed that people seem to regard Glaswegian and Brummie English more stupid compared to RP and other varieties of British English. I hadn’t seen, however, dialect in general being coupled with illiteracy and lack of education.

This made me more curious, so I decided to do a simple Google search and looked up “dialect uneducated”, at which I was surprised to see a great number of sites pop up.
One of these was this discussion about educated versus uneducated accents, which quickly changed into a discussion about dialect. 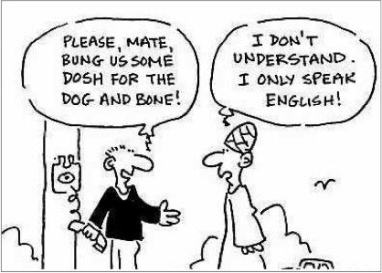 When Googling these two words together, you also get a lot of pages dealing with the question of why certain dialects are regarded as uneducated and what your accent or dialect says about you. The sites I found show how sensitive this subject can be and how worried we might be about it.

We all have certain attitudes towards certain dialects – be they conscious or subconscious – and we are not likely to get rid of these attitudes anytime soon. However, that does not mean that we shouldn’t try. To me, the two quotes from The New Fowler’s Modern English Usage (2000) just highlight this issue and, in my opinion, do not help in changing these, often negative, attitudes.

This entry was posted in Uncategorized and tagged dialect vs standard English, fowler. Bookmark the permalink.

4 Responses to Guess what?! You don’t just speak a dialect; you’re also illiterate and uneducated!