The Grammarians – by Cathleen Schine 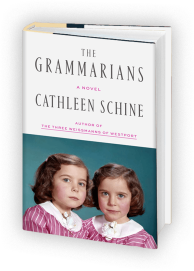 If you’re interested in prescriptivism, you might well want to read this recently published novel. It’s about twins who gradually grow apart, with the one thing binding them to the end being an old copy of a dictionary, probably  by Samuel Johnson, though they can only have it each to themselves 6 months at a time.

While the one twin turns into a poet, the other becomes a copy editor, whose focus is linguistic correctness: they couldn’t be further apart in the linguistic interests they develop over the years. There is a lot there for readers interested in prescriptivism: Fowler is referred to several times (though I wouldn’t have called Fowler’s Modern English Usage “an old grammar book”, p. 194: usage guides are not grammars), and many usage problems fly by, like the dangling participle, the split infinitive, the placement of only, the use of who/whom, and singular they – stuff we, linguists, don’t expect to find playing such a major role in a novel but love reading about.

What I don’t understand about the novel though is the role played in it by Johnson’s dictionary, who is quoted at the start of every chapter. The girls, in their early youth, had a fascination with words, and even developed their own secret language. They’re finally given a copy of a dictionary by their father, leaving it jointly to them after his death. By then, the twins are no longer on speaking terms and they have to find a way out for this. But Johnson was neither a grammarican nor a prescriptive handbook writer like Fowler, whose views on language do play more of a role in the novel. Perhaps my real (and actually only) problem with the book is its title: grammarians is what neither of the girls are.  Would The Poet and the Prescriptivist have been a better title? Even then, Johnson’s dictionary hardly seems to fit in.