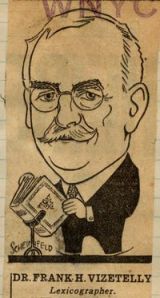 A Caricature of Vizetelly (source: WNYC)

Have you ever heard anybody say hain’t?  Have you seen it written down somewhere for have not or has not? Until this morning I was totally unfamiliar with the expression. To be honest, I  only knew of the existence of ain’t, and it is for this reason that I thought that Frank Vizetelly had made a mistake in his usage guide.

Because Frank Vizetelly’s A Desk-Book of Errors in English (1920) is to be included in the Hyper Usage Guide of English (the HUGE-database), I was searching Vizetelly’s guide this morning for usage problems. Although I had never heard of hain’t, Vizetelly makes it clear that the use of hain’t is an error people should avoid making:

hain’t: A common vulgarism for have not, haven’t,  and made worse, if possible, by being used also for has not or hasn’t; as I hain’t, He hain’t, etc. I haven’t, He hasn’t are permissible, haven’t I?  hasn’t he? are acceptable in conversation. But when the subject precedes in the first person  singular and the plural, it is preferable to abbreviate  the verb; as, I’v e not, you’ve not, etc. (page 102)

Because I still believed that Mr. Vizetelly could not but have made a slip of the pen when he was writing his guide, I decided to google hain’t. 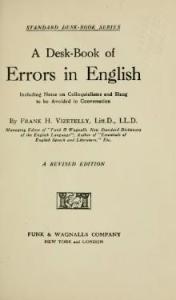 Guess what? The online dictionaries actually do include hain’t. The Oxford English Dictionary Online shows a small, five-word entry (“vulgar contr. of have not“). Further, Wiktionary states that hain’t is a dialectal and archaic contraction of has/have  not, and that it is a contraction of ain’t in some dialects. The Merriam Webster Dictionary, as well as some free online dictionaries (e.g. The Urban Dictionary and The Free Dictionary) also include hain’t.

After all it seems that Frank Vizetelly (or his editor) was not making a spelling error when he included hain’t in his usage guide. I wonder whether the expression occurs in other usage guides as well. Did you ever come across an entry with hain’t? Do you think that people these days would still consider hain’t a vulgarism – like Vizetelly did in the early twentieth century?