A parody within a parody?

Posted on July 16, 2014 by Viktorija Kostadinova

The latest prescriptive lesson on correct grammar doesn’t come from a usage guide or a grammar blog. It comes from “Weird Al” Yankovic’s latest album called “Mandatory Fun” in the form of a parody of Robin Thicke’s popular song “Blurred Lines”. It’s certainly an unconventional format for prescriptive advice on language, but undoubtedly an entertaining one. 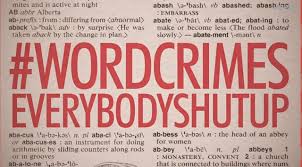 Appropriately dubbed “Word Crimes”, the parody contains quite an extensive account of the most common usage pet peeves covering all sorts of problems from spelling and punctuation to vocabulary and style. Despite the richness of material covered, the presentation is “literally” effortless. The inappropriate use of literally or using quotation marks for emphasis are just two in the whole array of word crimes featured in the song. Others include old chestnuts, such as the who and whom confusion, the improper use of apostrophes, or more recent usage problems, such as the Netspeak forms b for be, or u for you.

Just as I’m writing this post, the video seems to be causing quite a stir on the Internet. It has already been recommended as good language teaching material. This indeed makes a lot of sense as the presentation of rules in the video resembles the negative approach to grammar teaching, a didactic technique focusing on grammar mistakes that has been around since the rise of normative grammars in the 18th century. Slate’s Forrest Wickman already examined some of Yankovic’s rules of usage and how they compare to actual usage and showed that despite Yankovic’s proscriptions against such ‘mistakes’, some of these usages seem to be here to stay.

The parody also gives an inventory of the attitudes most commonly associated with such language mistakes. The link with education, or the lack thereof, is probably the strongest one: “I’ll try to educate you/ Gonna familiarize you/ With the nomenclature/ You’ll learn the definitions/ Of nouns and prepositions/ Literacy’s your mission”, and so on. Others include the common emotional reactions some people have to these mistakes as well as the personal qualities associated with them: “I hate these word crimes/ Like “I could care less”/ That means you do care/ At least a little/ Don’t be a moron”.

There are two things I find quite striking about the parody. One is the knack with which “Weird Al” Yankovich has managed to make a subject such as grammar rules incredibly effective parody material, especially in the context of the primary target of his parody, Thicke’s song. The other is that it is precisely this parody aspect that makes me wonder whether his parody stops there. To my mind, and in the context of  Yankovic’s work, this can just as well be seen as a parody of prescriptivism and grammar nitpicking that can trigger us to question the legitimacy of some of these grammar rules. Whatever the intention, this video can certainly be used not only to teach grammar rules in a fun and entertaining way, but also to inspire students to be critical about those rules and especially the attitudes associated with them.

4 Responses to A parody within a parody?