Bryson in Hungary and China

WorldCat is a wonderful resource for our kind of work (though not always entirely reliable …). I looked up Bryson’s Troublesome Words (1984), one of “our” usage guides, to find out how popular the book was. I was trying to follow up a comment made by Deborah Cameron in Verbal Hygiene (1995) about Bryson: “… that while [his] travel books did poorly in the US, an earlier book on language had ‘sold rather well'” (p. viii). This earlier book was Troublesome Words.

But WorldCat only lists three other editions or reprints besides the first, published in 1987, 2002 and 2009. BUT it also lists the following three editions: 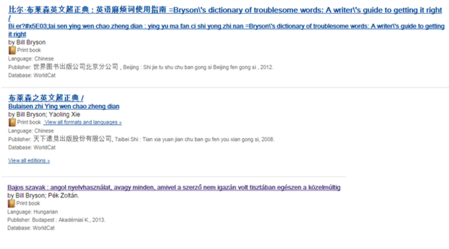 Apologies for the poor quality of the image: perhaps this may be an incentive to try and access WorldCat yourself … (or click on this link). WorldCat notes that the first two titles are in Chinese, and the third in Hungarian: how wonderful, Bryson translated (twice, in 2008 and 2012) into Chinese, and once into Hungarian, as recently as 2013.

I assume these translations are from the 1984 edition, so this means that an older norm of correctness is actually presented here. Perhaps it doesn’t matter (does it?). But what I’d also like to know is whether anyone knows whether the book came out in other languages as well. I’ve never seen the book translated into Dutch, but what about other languages?

Bill Bryson, can you help us here perhaps?

(Thanks Anikó, for your help.)

This entry was posted in news, usage guide and tagged Bill Bryson. Bookmark the permalink.